Due to its size, there are fewer gas retailers in the Australian Capital Territory than in other areas of Australia. However, the cold ACT winters drive up the demand for gas heating. As the ACT makes a push for renewable energy, the future of gas in the Territory is unclear.

In the meantime, the bulk of ACT residents are still using gas, which means that they’re still looking for competitive prices. This is your guide to gas in the ACT, along with tips on how to compare and save on your gas plan.

Overview of Gas in the ACT

The ACT’s gas market is the second smallest in Australia’s National Energy Market (NEM), so it’s no surprise that there are only three main gas retailers in the Territory: ActewAGL, Energy Australia and Origin.

The Australian Energy Market Commission (AEMC) found that in December 2017, these three retailers supplied gas to about 143,000 customers. At that time, ActewAGL had a 92 percent market share of ACT gas.

The Australian Energy Market Commission (AEMC) found that in December 2017, these three retailers supplied gas to about 143,000 customers. At that time, ActewAGL had a 92 percent market share of ACT gas.

Evoenergy is the primary gas distributor in the ACT, but some smaller areas may get their gas from a different company. For example, East Australia Pipeline is licensed to operate a 6km section of pipeline in the ACT.

Although the market is small, there is evidence that competition is on the rise, as ActewAGL’s market share has actually decreased. According to the AEMC’s 2017 survey, the number of people who are aware they have the option to choose their own energy plan increased from the previous year. 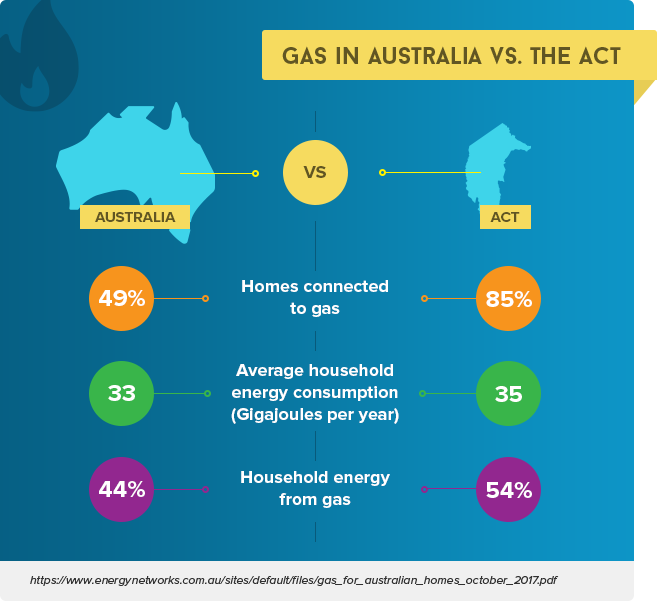 Comparing Gas Plans in the ACT

Natural gas prices are not regulated in the Australian Capital Territory, creating a more competitive market for customers. Although the low number of ACT gas retailers does limit choice, residents can still benefit by comparing prices from different suppliers.

When comparing ACT gas plans, there are several things to look at: 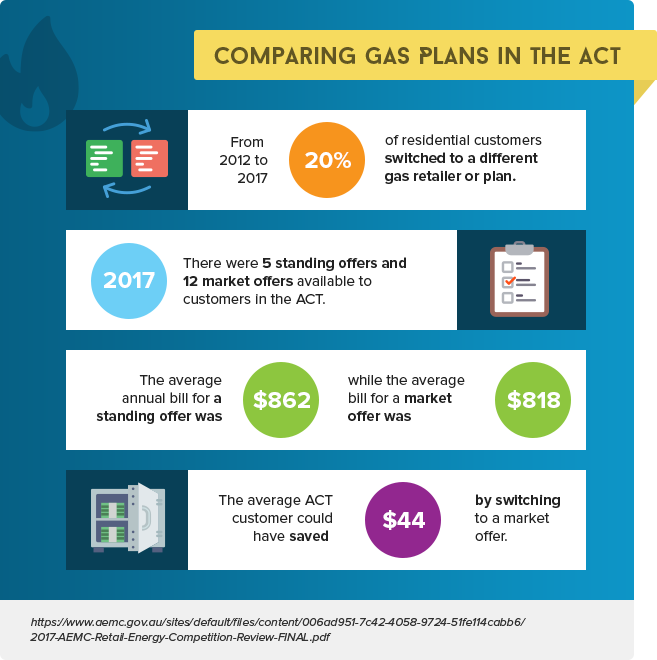 ACT Weather and Your Gas Bill

The ACT’s notoriously cold winters can have a serious impact on your gas bill. In 2013-14, NT residents spent an average of $240 million on gas, despite it being used mainly for hot water and space heating.

Gas consumption in the ACT fluctuates depending on the weather: the colder it is, the more gas is used. However, studies show that temperatures above 16°C do not have an effect on gas consumption.

If you use gas for space heating, you can reduce the cost of gas by implementing energy-efficient measures in your home. For example, seal up any drafts in the doors or windows and only heat the rooms you are using. These may seem like small steps, but they can add up on your bill. 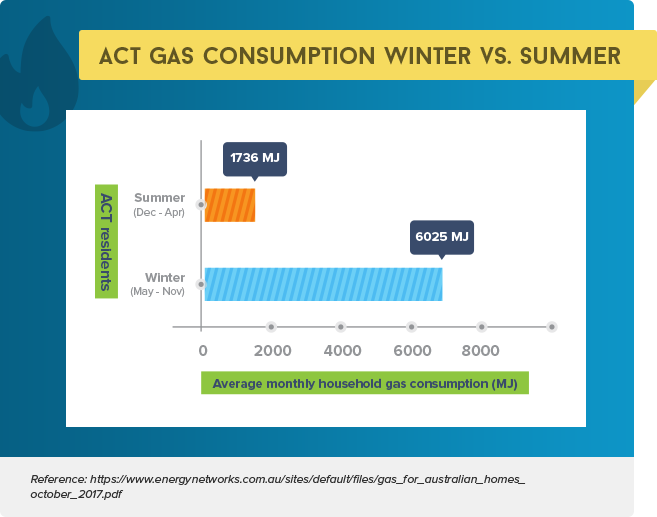 The Future of Gas in the ACT

The ACT is committed to reducing its greenhouse gas emissions to 40% below the levels recorded in 1990 by 2020. By 2050, it has set a target of zero emissions. These high targets have led to a number of initiatives that affect gas in the ACT.

Currently, there is a need to install gas infrastructure in a new ACT suburb. The government is trialling a scheme in the suburb of Ginninderry, where the installment will not apply to the first 350 homes. Instead, they intend to create a renewable energy network of solar panels and battery storage. These homes will be the first suburb in the ACT without a natural gas connection.

As gas is traditionally cheaper than electricity and many people prefer natural gas, the future presence of gas in the ACT remains to be seen. Homes that have a natural gas connection are still able to compare gas plans to save on their energy costs. 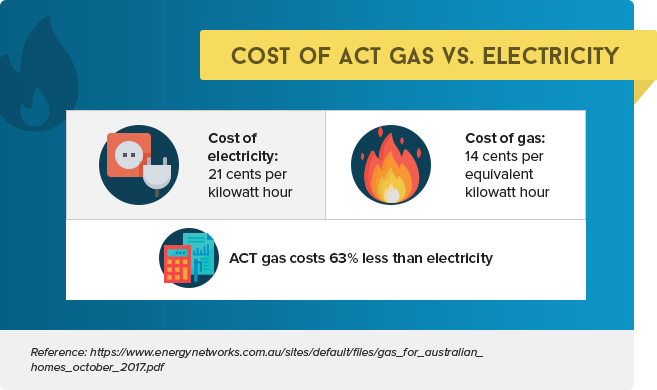 The ACT has some rebates and concessions in place to help residents reduce the cost of gas. (This information was accurate at the time of publication in June 2018).

The EEIS is an ACT government initiative developed to help meet energy targets and reduce energy costs for ACT households and businesses. A number of rebates and incentives are available through the scheme, including:

A combined energy rebate of up to $604 annually to help with utility bills, including gas. Available to eligible concession card holders.

A combined energy rebate of up to $604 annually to help with utility bills, including gas. Available to eligible concession card holders.

Consult your gas retailer to see which concessions you can apply for.